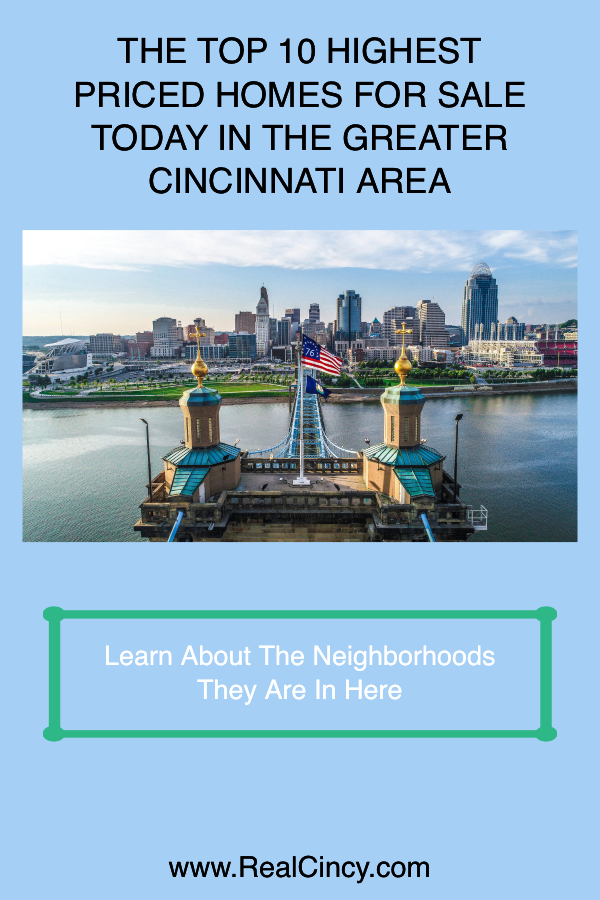 The Greater Cincinnati is no stranger to luxury homes and has many luxury apartments, condominiums, and homes to choose from.  The neighborhoods these homes are found in are in and around the Greater Cincinnati area and represent the best the city has to offer.  These homes offer some of the latest and greatest in luxury as well as technology and are found in the following great neighborhoods:

What began as a farming community in 1904 the Village of Indian Hill later was reshaped into more of an area for large estates.  The homes in Indian Hill represent some of the best of what Cincinnati has to offer.  In 2002 the Robb Report rated Indian Hill, OH as one of the best places to raise a family.  Of the top ten priciest homes in the Greater Cincinnati area Indian Hill has 7 homes on the list.

Organized into a township in 1793 Anderson has been rated as one of the most livabile communites in Greater Cincinnati.  Featuring a wide variety of housing, shopping and dining options Anderson Township has a lot to offer residents and is only minutes away from Downtown Cincinnati.

Hyde Park is a surburb on the east side of Cincinnati, Ohio.  Established in 1892 it was named after an area in New York.  The City of Cincinnati annexed Hyde Park in 1903.  Hyde Park was named one the best neighborhoods in America in 2010 by Forbes magazine.

Miami Township is located in Clermont County, Ohio.  Parts of the City of Loveland and Milford are located within the township.

Union Township is located in Clermont County, Ohio.  Established in 1811 it has 29.2 square miles of land and approximately 46,000 residents.

Sterling Township is located in Brown County, Ohio.  Established in 1824 it has 28.4 square miles and approximately 4000 residents.

Listed in order of most expensive and down, check out the top ten highest priced homes for sale in the Greater Cincinnati, Ohio and Northern Kentucky area below.  If you are interested in seeing any of the homes please reach out to me today.

About the author: The above article “The Top 10 Highest Priced Homes For Sale Today In The Greater Cincinnati Area” was provided by Paul Sian. Paul can be reached at paul@CinciNKYRealEstate.com or by phone at 513-560-8002. If you’re thinking of selling or buying your investment or commercial business property I would love to share my marketing knowledge and expertise to help you.  Contact me today!