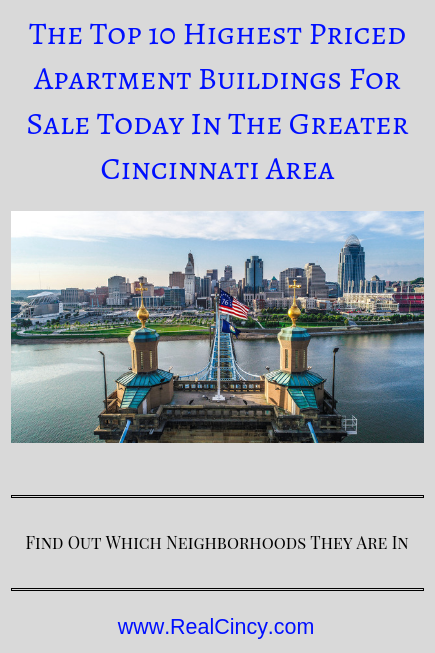 The Top Ten Most Expensive Apartment Buildings In Greater Cincinnati

The Greater Cincinnati area has been getting a lot of attention from out of state and even out of country investors looking for multi-family apartment buildings in order to build their cash flow empire.  With prices being paid for buildings in the Greater Cincinnati area investors can find their dollars generating more cash flow in Cincinnati than in many other large markets around the United States.  Check out some of the most expensive multi-family listings available on the market today as well as learn more about the locations they are in.  If you want to learn more about the cash flow possibilities of any particular property be sure to get in contact today with a local Cincinnati and Northern Kentucky Real Estate agent.  (This list focuses on multi-family buildings in one location as opposed to a listing of a portfolio of property spread around the city that are listed for sale as a package deal.)

Settled in 1788 Cincinnati metropolitan area is one of the 28th largest economies in the US.  Home to such major corporations such as Kroger, Procter and Gamble, Great American Insurance and more it has a population of approximately 2.1 million people.  Being so close to other major cities makes Cincinnati a great place for those looking for work or low cost of living housing.

Located in the Northern part of Kentucky it is close to the Cincinnati metropolitan area.  It was settled in the early 1800s.

Named after the Biblical city of Hebron it was established in 1858.  The Cincinnati and Northern Kentucky International Airport is located in Hebron.  Amazon and Wayfair also maintain a presence in Hebron.

Hyde Park was established in 1892 and named after New York’s Hyde Park area.  The City of Cincinnati annexed Hyde Park in 1903.  Forbes named Hyde Park, Cincinnati as one of America’s Best Neighborhoods in 2010.  Hyde Park Square boasts being one of Cincinnati’s oldest gathering places.  The Square has over 175 shops, restaurants, services, events and more.

Settled in the mid 1800s the Price Hill neighborhood of Cincinnati is to the west of downtown Cincinnati.

Interested in seeing any of these apartment buildings?  Be sure to get in touch with me through one of the means mentioned below!

This list is subject to change based on properties getting sold or price changes.

About the author: The above article “The Top 10 Highest Priced Apartment Buildings For Sale Today In The Greater Cincinnati Area” was provided by Paul Sian. Paul can be reached at paul@CinciNKYRealEstate.com or by phone at 513-560-8002. If you’re thinking of selling or buying your investment or commercial business property I would love to share my marketing knowledge and expertise to help you.  Contact me today!