The October 2017 luxury real estate market showed a slight uptick in sales and median price in the Greater Cincinnati area.  The last quarter of the year is typically the slowest of the year when it comes to housing sales as fewer people are interested in moving during the cold months and holiday gatherings can interfere with the process of selling a home.  Look for the current trend to continue throughout the rest of 2017.  A Federal Reserve interest rate hike may start some movement in the housing market in one direction or the other.  Consumer spending has increased but it has come at the expense of consumers tapping spending at record levels since 2009 which cannot lead to a sustainable expansion.  Check out the links below for more details. 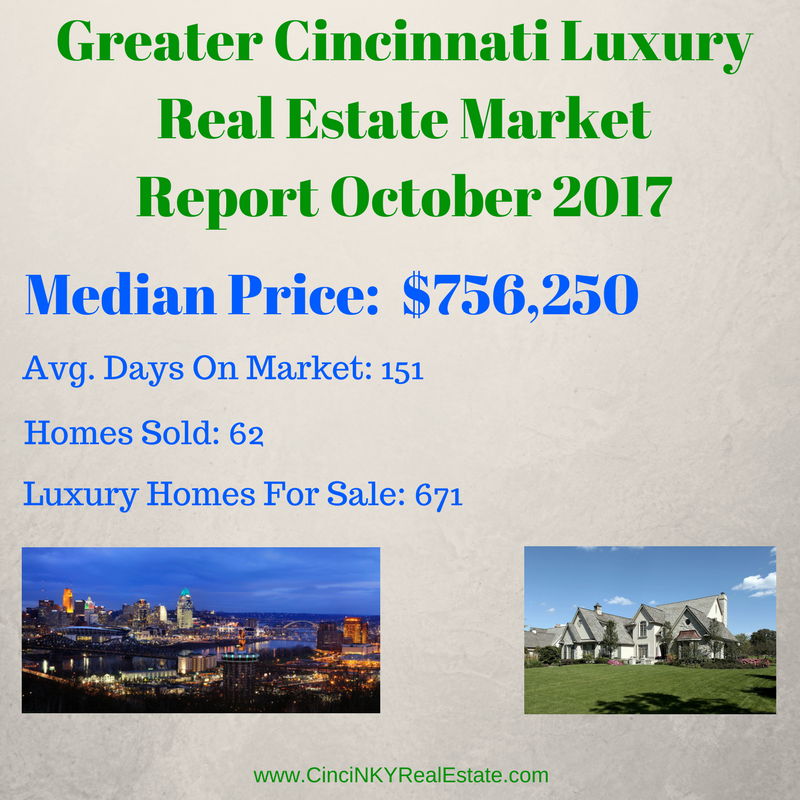 The real estate market continues to show signs of softening as pending home sales all over the US are on a downward trend.  Even with interest rates as low as they are home inventory remains tight and it could be possible that buyers are beginning to also pull back and wait until housing is more affordable.  Millennials with their current debt levels and attitudes that are not necessarily for homeownership could play in to the coming months as the real estate market sorts itself out.

An interesting article about homeownership in Australia tells of homeowners who could not afford an extra $100 in mortgage payments if interest rates were to rise.  The same could happen in the U.S. if interest rates were to rise which would cause pressure on those with adjustable rate mortgages (ARM) and limited time interest only mortgages.  The Federal Reserve has indicated a desire to raise rates but whether they are actually able to do so remains to be seen.  Higher priced luxury homeowners who are looking to sell should try to sell now rather than waiting to see if buyer interest comes back. 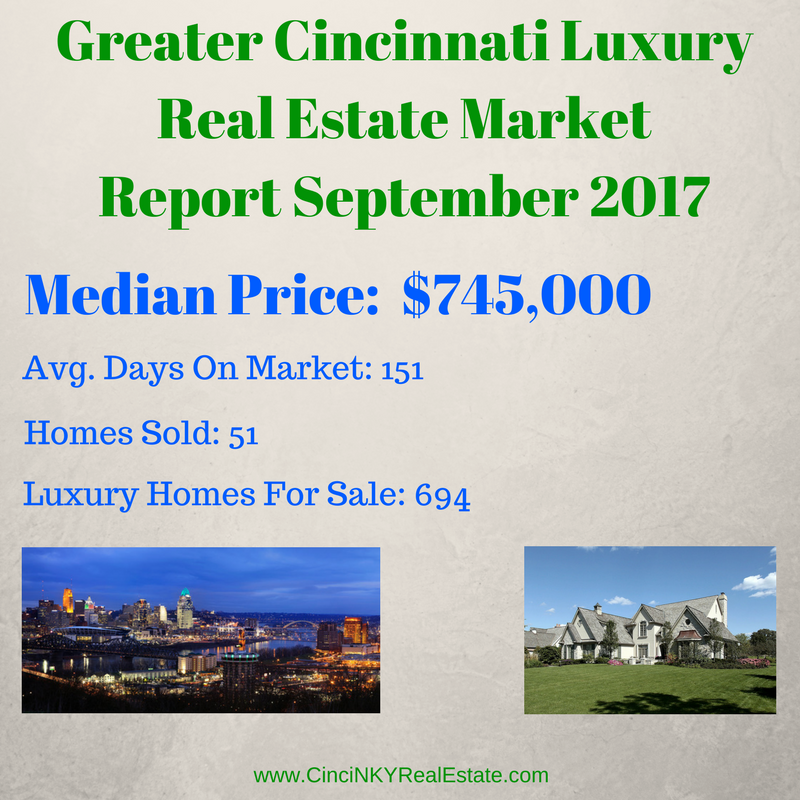 Interest rates for conventional and jumbo mortgages are still low and overall home sales are depressed.  The reason for depressed home sales is thought to be low inventory.  There is also a trend of certain buyers opting to remain more mobile by not purchasing and instead renting a place to own.  Since July 2017 the average prices of luxury homes has gone up in the Greater Cincinnati area as well as the inventory has gone done which is somewhat expected as homes sell or are pulled off of the market until Fall or Spring.  In the case of Greater Cincinnati more luxury homes sold during the month of August than did in July.  See below for more statistics and articles of interest. 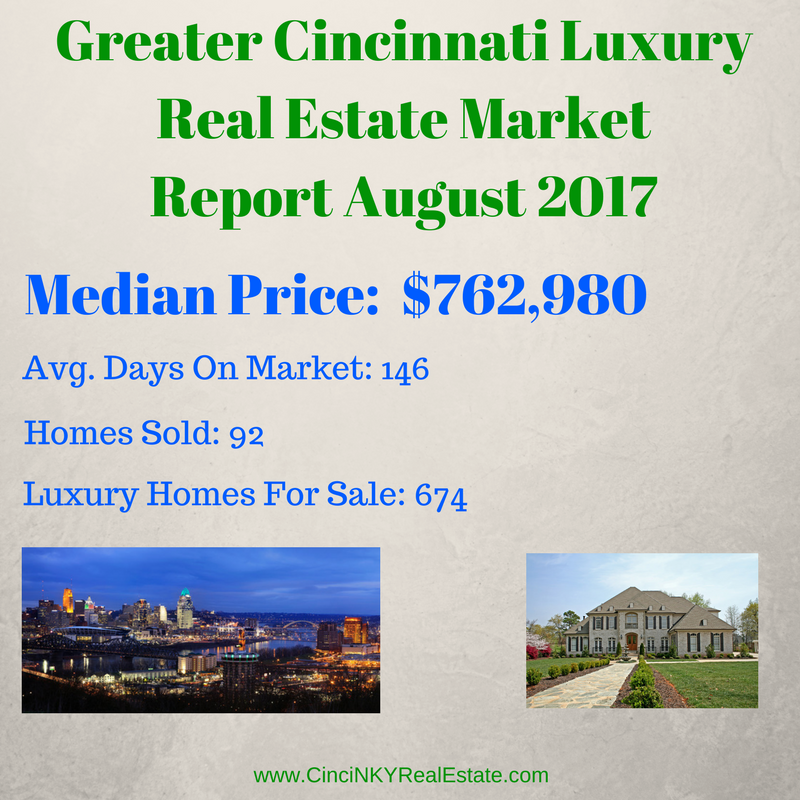 With interest rates slowly coming down there has been a slight uptick in mortgage applications but there still remains a shortage of available housing.  Jumbo mortgage interest rates have also reduced somewhat from the recent highs.  Record high pricing in homes is forcing some buyers to the sideline and with there is a new sentiment creeping up that is not as keen on housing as some in the past may have been.  Overall still a good time to sell a home if the homeowner is ready.  Luxury real estate statistics for July 2017 are in the below graphic and be sure to check out some insightful links below. 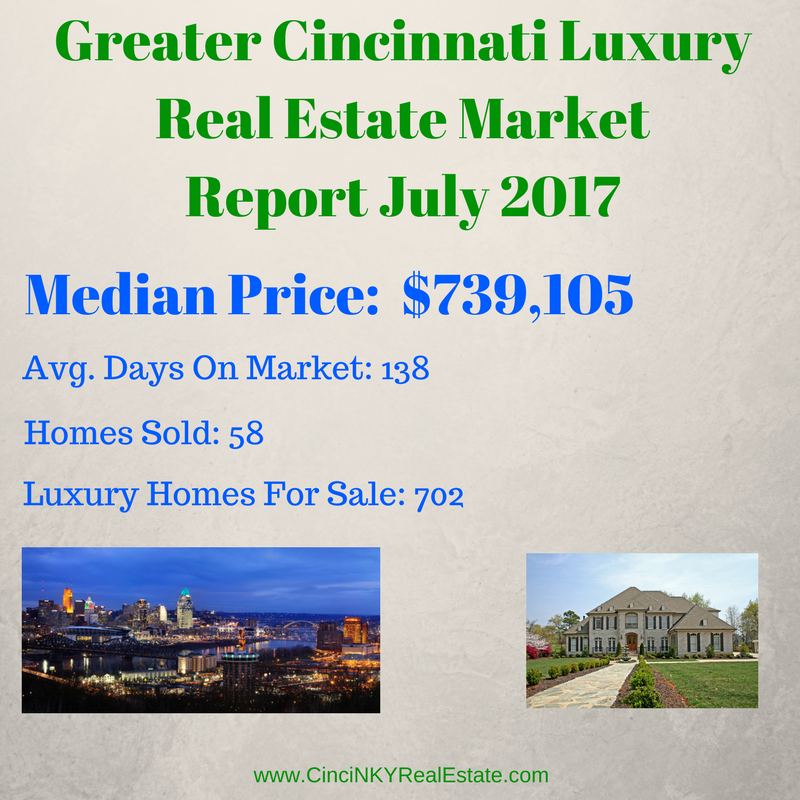 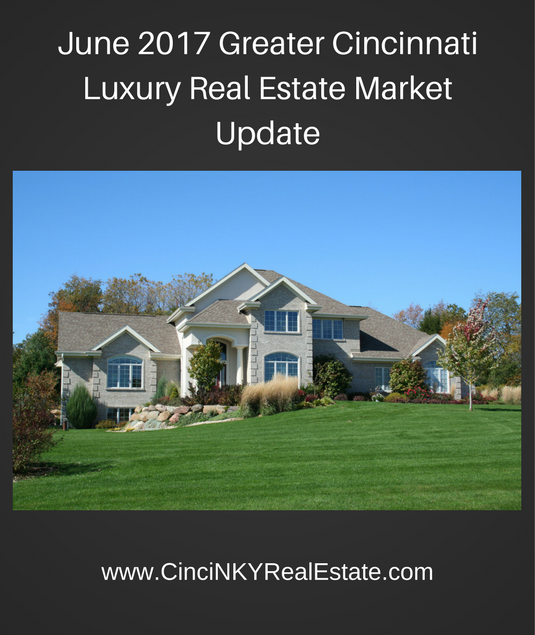 The luxury real estate market in Greater Cincinnati is a bit slower than homes that are non-luxury in category.  There are a number of reasons luxury homes (homes $600,000 and up in price) are sitting for longer on the market and requiring steeper price reductions in order to get offers.  Local employers such as Kroger and Macy’s are facing tough competition from online sales (Amazon anyone) and as a result are scaling back growth and hiring.  Consequently less money is being spent locally to hire people in senior level positions and less money being spent to expand or improve existing stores.

Kroger in particular has decided to slow down expansion across the Greater Cincinnati area.  Due to Amazon.com announcing the purchase of Whole Foods the grocery sector in general will experience a big disruption which will force grocery retailers like Kroger to spend less and be more nimble in adopting services that customers have yet to express an actual demand for.  Less money being spent by Kroger for expansion means less money being distributed across the region, which will slow things down.   Also with the upcoming final movement of Toyota from Northern Kentucky to Fort Worth, Texas means plenty of high-level jobs leaving the region along with those employees selling their homes.  Those Toyota jobs being higher wage earners will put downward pressure on luxury homes.