Where To Get Great Barbecue In Cincinnati 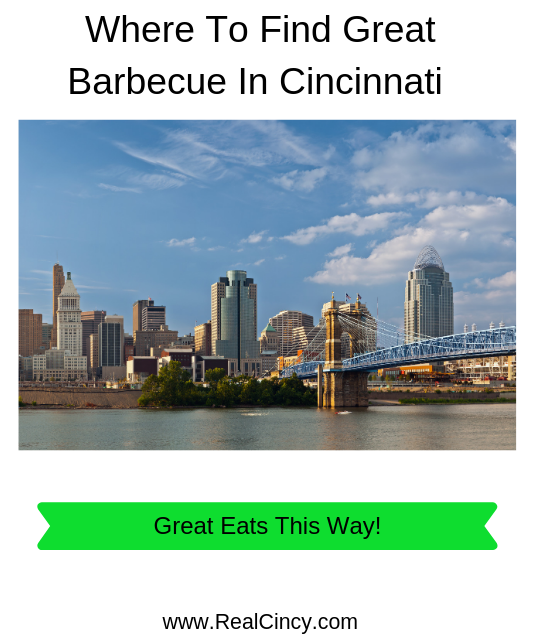 Where To Get Great Barbecue In Cincinnati

When people hear Cincinnati they may commonly think about the special variety of chili available here (that is a topic for another blog article), Graeters ice cream, goetta or some of the Cincinnati based specialty sausages of German origin.  Some may not know Cincinnati has a great barbecue presence that includes a nationally recognized barbecue joints.  Cincinnati is definitely a foodie paradise and barbecue is no exception as can be seen by the list of great barbecue places listed below.

Eli’s BBQ started up business in 2011 serving up delicious barbecue on Cincinnati’s Fountain Square.  With the initial success from a summer of hard work they decided to open up a brick and mortar shop on Cincinnati’s east side.  Now Eli’s BBQ has five locations located all over the Cincinnati area.  In 2016 online business news magazine Business Insider named Eli’s number three in the nation of top barbecue places in the US.  Come early though to make sure you get a seat as their food has been known to sell out due to the huge demand.

Happy Thanksgiving to you and yours! ???? We are so thankful for our amazing staff, family and friends. We are closed today & tomorrow and will reopen Saturday, 11/24. We hope everyone has a safe, happy and healthy holiday!

Located in the Mount Washington neighborhood of Cincinnati, Sweets and Meats BBQ started off small in the parking lot of a local ice cream shop.  Their success would soon help them build their way to opening a brick and mortar take out spot not too far from where they started.  Sweets and Meats offers takeout and catering services.  Recently Sweets and Meats added a food truck to their offerings to be able to take their food out on the road.

What started off as a food truck in the Cincinnati area allowed Just Qin to add a small store front in Newtown, Ohio.  From there they moved to the Walnut Hills area of Cincinnati which has been experiencing a revitalization.  Just Qin continues to operate their food truck and their store front to serve great barbecue flavors.

One of the older Cincinnati barbecue restaurants around Montgomery Inn got their start in 1951 in Montgomery, Ohio (a suburb of Cincinnati). Their ribs and sauce are so famous that celebrities and politicians make it a point to stop by and try some. Every president since Gerald Ford has tried Montgomery Inn is one of their claim to fame.

Their Facebook page lists them as a barbecue restaurant and dive bar.  Judging by the Instagram pictures Pontiac hits the mark on the décor of the restaurant which adds to the unique vibe. They also carry a large selection of whiskey and bourbons to serve up neat or in a tasty cocktail.

What started off as entering some barbecue competitions in order to compete against some of the big dogs of barbecue turned into some strong wins.  With those wins the founder of Big Dogg BBQ (who is also a Army Veteran) started up a food truck that has had great success to go along with the great tasting cue that they sell.  Their success has been so good that a second food truck was started in order to be at more than one place at one time.

SmoQ emphasizes the slow and low cooking method to make their southern style barbecue.  They have the traditional barbecue fare but also add dishes like jambalaya, Cajun salmon, chicken & waffles and more.  SmoQ offers dine in, carry out and catering options for items on their menu.

Cincinnati has a great history of food and a great foodie culture for anyone to enjoy.  When looking for great barbecue look no further than your own back yard in the Greater Cincinnati, Ohio area.  What other Cincinnati barbecue restaurants are worthy of mention?  Feel free to drop their name in the comments below.

About the author: The above article “Where To Get Great Barbecue In Cincinnati” was provided by Paul Sian. Paul can be reached at paul@CinciNKYRealEstate.com or by phone at 513-560-8002. If you’re thinking of selling or buying your investment or commercial business property I would love to share my marketing knowledge and expertise to help you.  Contact me today!